A couple with 3 children living in a preserved building in Tel-Aviv needed a full interior renovation of their apartment. Being a preserved building, meant that the windows could not be modified, nor could the front door be positioned anywhere else. With these regulations in mind, a new floor plan was created, all interior walls were demolished, and a new layout was planned. The concept was to Simplify. Two main guidelines were used. The first was to enable as much air and light into the space. This was achieved by knocking down unnecessary walls. For example, by demolishing the wall that separated the old kitchen to the closed balcony, it exposed the living area to air, light, and also views of the lovely trees and the inner garden. This decision alone had a great impact on the sense of space. The second guideline was determining that the home would consist of essentially three areas only: The living area (open space kitchen & lounge) and 2 bedrooms – one for the couple and one for the children. The children’s room is a large space that they can play freely and invite friends over but can easily become two separate areas when needed. A custom made partition was built, enabling the older boy to close his room and gain privacy. When it is closed, the room is still spacious enough, each side having its own desk and storage space. Other guidelines were choosing basic materials, designing custom made carpentry to suit the space and the needs of the clients. New viewpoints were created, the outside scenery became part of the interior and a sense of spaciousness was obtained for this relatively small home, inhabited by a family of five. Photos: Galit Deutsch 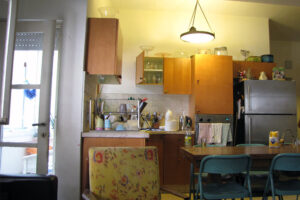 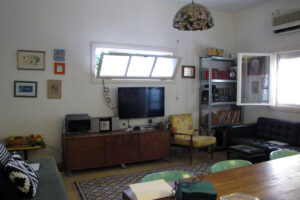